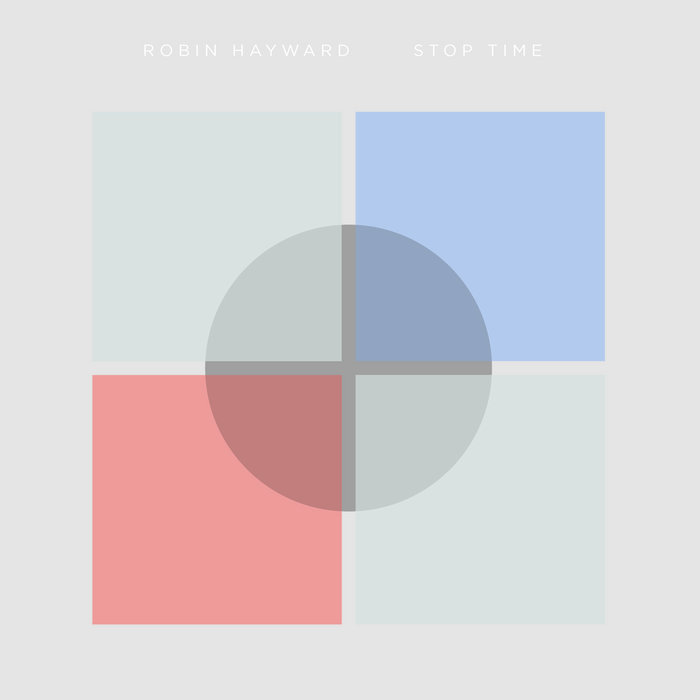 Robin Hayward plays microtonal tuba in Catherine Christer Hennix's ensemble and Stop Time is his first composition to be released on Important Records.

Stop Time was commissioned for a festival of the same name taking place in Leuven in 2013. It is the first piece to use a subset of the three-dimensional physical version of the Hayward Tuning Vine, invented in 2012, as a musical score. The harmonic space implied within the four cubes contained within the subset, based on prime numbers two (octave, colour-coded grey), three (perfect fifth, colour-coded blue) and five (major third, colour-coded red), is explored by the acoustic instruments and projected via the surround-sound system onto the physical space of the performance area. In tonight's performance, the colour-coding is made explicit through spotlighting each musician according to the colour of the pitch they are currently playing. In the middle of the piece, when the the central black ball is sounded, the lighting therefore momentarily disappears. The idea is not so much to simulate synesthesia as to explore possible interactions between sound, vision, space and time. Harmonic space is projected over time onto physical space, thus "stopping time."

The recording and photos are from a performance taking place at De Bijloke, Ghent, in September 2014.

REVIEWS
"British tuba player Robin Hayward has been among the most indefatigable explorers of that notoriously unwieldy horn for two decades, both as a top-flight free improviser and more significantly as an advocate of applying microtonal tuning systems to his instrument. In 2009 he helped develop a micro­tonal version of the tuba, which he's used in solo contexts as well as in the wonderful tuba trio Microtub. Stop Time is a 30-­minute piece that uses another of his innovations, a software interface called the Hayward Tuning Vine, which helps players visualize and explore the intricacies of just intonation—a system popularized by La Monte Young and the late Tony Conrad in which the intervals in a scale are derived not from a constant frequency multiplier but from varying ratios of whole numbers. For Stop Time a portion of the interface is adapted into a physical score, which Hayward, cellist Pieter Matthynssens, and baritone saxophonist Bertel Schollaert follow to generate sounds whose pitch relationships are mapped out in overlapping, color-coded quadrants; those colors are projected during live performances to encourage interaction between hue and tone. That might sound like gobbledygook, but the music is exquisite, rippling with dazzling harmonic effects that give its droning tones a seductive richness." ~ Peter Margasak/Chicago Reader